Ensuring that everyone in the country has access to financial services remains a top priority for the banking industry. A recent NPR story highlighted the number of bank branch closures in 2020, and raised the ominous specter of bank deserts popping up across the country, especially in lower-income, rural and at-risk communities. A closer look at the data, however, paints a much different picture of Americans’ access to banking services.

According to the FDIC, there are more than 85,000 bank branches in the country today. Last year, S&P reports that roughly 3,400 branches closed, and more than 1000 new branches opened. There are many reasons for branch closures including industry consolidation, lack of demand and (perhaps most significantly) the growing use of mobile and online banking which has only increased during the pandemic.

The key questions the NPR story failed to ask are where are the closures taking place and do people in those communities still have access to banking services? A closer look at the data would have revealed that most branch closures in the U.S. have occurred in upper- and middle-income neighborhoods and saturated urban markets. In addition, while branches remain important to many Americans, focusing solely on physical proximity to a branch undervalues the growing adoption of popular digital channels by Americans of all backgrounds. Had NPR reached out to ABA for this story, we could have shared the data that highlight this reality.

Ensuring that everyone in the country has access to banking services is an issue ABA and our members take very seriously. Promoting financial inclusion is good for our industry and the country, and there is more work for banks of all sizes to do in this effort. We need to start with the same set of facts, however.

While it’s certainly possible to find communities in the country without a bank branch nearby, the data clearly show they are the exception—not the rule. At the same time, bank investments in new technologies are allowing for access to accounts wherever customers are.

Banking services are accessible to nearly all Americans The vast majority of U.S. households live in close proximity to a wide selection of bank branches—with the average American living within commuting distance of 25 branch locations. (We define commuting distance as being within a two-mile radius of the geographic center of urban census tracts and within a 10-mile radius of rural or mixed census tracts. See figure 1.) Residents of low-income neighborhoods actually have the highest share of nearby bank branches. The typical resident of a low-income census tract resides within two miles of 17 bank branches and within 10 miles of 276 branch locations. This trend persists across urban, rural and suburban geographies. Low-income and upper-income neighborhoods are close to slightly more branches than moderate- and middle-income neighborhoods (which themselves remain well served with proportionally similar access).

Despite this, a small population of Americans live in so-called banking deserts. Almost all banking deserts are found in extremely rural areas with exceptionally low population densities. The median banking desert contains only 7.6 people per square mile. While some vulnerable households reside in banking deserts, they constitute a small and un-representative share of the U.S. population. Banking deserts are 80 percent white and mostly upper- or middle-income. They represent 0.3 percent of the population residing in low-income neighborhoods, 0.7 percent of Black Americans, 0.2 percent of Asian Americans, and 1.2 percent of Hispanic Americans. The banking industry recognizes the importance of ensuring continued service and expanding access in extremely rural areas. Targeted investments in internet infrastructure is one practical solution to help expand access to financial services for the most rural areas in the U.S.

Technological innovation has also rapidly transformed the way Americans bank. Today, Americans increasingly rely on digital channels to access banking services. More than a third (34 percent) of American households used mobile channels as their primary method of accessing bank accounts in 2019, according to the FDIC, up 18.4 percentage points from 2017, with the largest gains in adoption of mobile banking among Black, Asian, and Hispanic Americans. Given continued focused investment in expanding broadband access across the U.S., digital banking presents a promising avenue for further bridging the financial divide.

Customers recognize and appreciate bank investments in improving digital access. Nearly all bank customers (99 percent) ranked their bank’s online and mobile experience as “excellent,” “very good,” or “good,” according to a Morning Consult survey in March on behalf of the ABA. Eighty-four percent of Americans strongly or somewhat agree that innovation and technology improvements by banks are making it easier for all Americans to access financial services. Given the growth of digital and online tools, 91 percent of Americans surveyed said that overall access to banking services today is “good,” “very good,” or “excellent.” 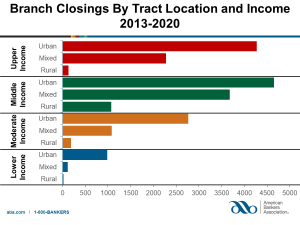 While banks have begun to shift branch strategies to face technological, economic and demographic changes, they have not come at the expense of access for customers. For example, while branch closures have outpaced branch openings over the past several years, they have largely been concentrated in saturated, upper- and middle-income (primarily urban) markets where branch access is widespread (see figure 2). More than three-quarters (76 percent) of bank branch closings have occurred in middle- and upper-income census tracts, and nearly 94 percent have been in urban or suburban areas. From 2013 to 2020, the average closed bank branch had 18 branches operating within a two-mile radius and 159 branches within a 10-mile radius.

Most Americans have access to banking services, but more than 7 million households are completely unbanked, according to the FDIC. Although this is the lowest level of unbanked, at 5.4 percent, measured since the first report in 2009, ABA believes that figure is still too high. America’s banks have several initiatives underway to reduce the number unbanked in the country.

Unbanked households cited a number of reasons for not having a bank account in 2019, including both structural and motivational barriers. The most common reason (48.9 percent) was having too little funds to meet the minimum balance requirement and more than a third reported that they either do not trust banks (36.3 percent), avoid banks for privacy reasons (36.0 percent) or think account fees are excessive (34.2 percent).

To expand access to banking services, ABA has joined forces with the Cities for Financial Empowerment Fund to encourage more financial institutions to join the Bank On initiative. Bank On certified accounts are designed to address the structural challenges facing unbanked households with features including low costs, online bill pay, no overdraft fees, and transaction capabilities such as a debit or prepaid cards. In its 2019 Bank On National Data Hub report, the St. Louis Fed noted that “the demand and use of Bank On accounts is strong and continues to grow,” with more than 3.4 million accounts opened to date across just 10 reporting institutions. Early findings indicate the initiative has already made headway reaching unbanked households, as 75 percent of Bank On accounts have been opened by new customers. More than half of unbanked households (56.2 percent) reported that they were not at all interested in having bank accounts, according to the FDIC. While Bank On accounts address many of the structural challenges cited by unbanked households, focused messaging and outreach can help address motivational challenges. The CFE Fund conducted focus groups and surveys to identify messages that resonate the most with unbanked populations and found that tailored messaging and education can help move the needle (see figure 3).

While respondents tended to have negative perceptions about banks, two-thirds became interested in getting an account after learning how one can help them increase savings, pay down debt, and build emergency funds. After exposure to tailored messaging, the report found favorability towards banks increased by 17 percentage points, interest in learning about banks by 11 points and intent to get a bank account by 14 points.

America’s banks believe everyone should have access to the banking system and the safety, convenience, and other benefits that come with deposit accounts and are actively making strides to reach those outside the traditional banking system. When safe, affordable and accessible financial products and services are readily available, families, communities and the economy can prosper.