A lawyer and a professional baseball player walk into a bank… no, it’s not a joke — it’s the latest episode of the ABA Banking Journal Podcast. Emily Gray graduated from law school, and Blake Taylor began his working life as a minor-league baseball player, but both of them ended up building successful careers in community banking. Gray is now senior credit officer at Hardin County Bank, Savannah, Tenn., and Taylor is an SVP and commercial real estate lender at Southern First Bank in Columbia, S.C.

They are chair and vice chair, respectively, of ABA’s Emerging Leaders Advisory Board, and on the podcast they discuss how rising leaders in banking can develop their careers and position themselves to succeed. One important skill, for example, is “horizontal leadership” (compared with top-down leadership). “You’ve got to be able to lead horizontally with your peers,” says Gray. “A lot of the time, and especially in community banks, you have so many people who wear so many different hats that the hierarchy isn’t there as much as in a larger institution.”

Both Gray and Taylor speak frankly about the challenges facing ambitious community bankers as industry consolidation continues. “There’s only  a handful of those [C-suite] opportunities,” says Taylor. “What’s going to set me apart?” But Gray adds that she’s optimistic: “I don’t think there’s ever been a better time to be a young banker.” Both veterans of young bankers’ programs in their own states, they also discuss the roles of the state bankers associations in developing the next generation of executive banking talent. 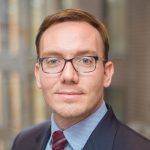