Trending
In honor of our veterans, the ABA Banking Journal is sharing several stories from America’s Banks of how banks serve and employ those who have served. We salute all the men and women who have served our country in the armed forces.

Arvest Bank, headquartered in Fayetteville, AR, presents military branch flags to VA Loan Program recipients at mortgage closing, throughout the bank’s four-state footprint. Recipients are surprised and pleased, said Carter Maxey, Arvest’s marketing manager for its mortgage division, and a Marine Corps veteran. “I have to admit I have choked up just reading accounts of some of the veterans’ responses to receiving the branch flag,” Maxey said. “That’s when I realized how powerful this had become.” 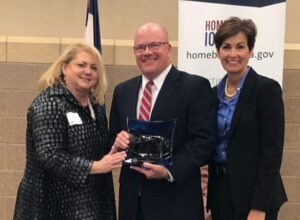 Lincoln Savings Bank in Grinnell, Iowa, has a champion on its team. Mike Olson, the bank’s vice president, was named Small Business Champion of the Year by the Iowa Small Business Administration. Mike, a retired lieutenant colonel in the Iowa Army National Guard, volunteers his financial expertise to conduct training for the U.S. SBA’s Boots to Business: Reboot program. The program helps veterans and their families start, grow and build small businesses with comprehensive training and mentorship.

Citizens Bank’s Small Business Recovery Program committed $2 million to business customers impacted by the COVID-19 pandemic. Through the program, 134 small businesses were selected to receive a $15,000 grant to help them recover. One recipient is Operation Made, a small Rhode Island-based boutique where Veterans and military spouses can sell their handcrafted merchandise.

Owner Nicole O’Brien was compelled to find a meaningful way to help veterans and their families beyond a monetary donation. “These vets aren’t looking for a handout,” O’Brien says. “They just need support, because it can be so tough for them to find stable employment once they’re separated from the military.” Operation Made has been O’Brien’s way of employing veterans while also helping them find their purpose again. Many of the veterans involved struggle with Post Traumatic Stress Disorder (PTSD) and use art therapy as a way to heal. Using their hands and imaginations to create art is how many of these veterans endure emotionally–and through Operation Made, they can financially benefit, too. Regions Bank, based in Birmingham, Ala., awarded its top honor for its associates—the Better Life Award—to Steve Beres, a veteran with a powerful story. Steve was injured in Afghanistan, losing his sight. As Regions’ first service member and veterans affairs manager, Steve now manages relationships with organizations that support veterans. Regions donated $1,000 in Steve’s name to H.E.R.O.E.S. Care, a non-profit that supports military families.