Consumer sentiment rose to 96.1 in June, up 5.4 points from the previous month according to the University of Michigan Consumer Sentiment Index. The index is currently 15.6 points higher than in June of 2014. 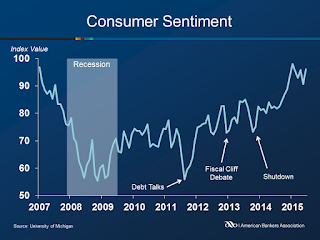 The first half of 2015 marked “the largest and most sustained increase in consumer optimism since 2004,” according to Richard Curtin, chief economist of UM’s Surveys of Consumers. “Moreover, the recent surveys recorded those same records when consumers were asked to evaluate prospects for the national economy, their personal finances, and buying conditions. Consumer spending will remain the driving force of economic growth in 2015.”

The Current Economic Conditions index rose 8.1 points to 108.9, while the Index of Consumer Expectations rose 3.6 points to 87.8.