U.S. real GDP for the first quarter decreased at a rate of 0.7 percent, according to the second estimate released by the Bureau of Economic Analysis. The decline is in stark contrast to the 2.2 percent growth in the fourth quarter of 2014. 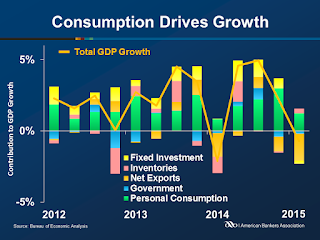 Real exports largely contributed to the decline, decreasing 7.6 percent in the first quarter compared to 4.5 percent growth in the fourth quarter.