The 20-City Case-Shiller Compositev Index gained 5 percent year-over-year in March, consistent with February’s gain. The 10-City Composite gained 4.7 percent in March from the previous year, down from the 4.8 percent year-over-year gain in February. The National Index recorded a 4.1 percent gain on an annual basis in March, compared to a 4.2% annual gain in February. 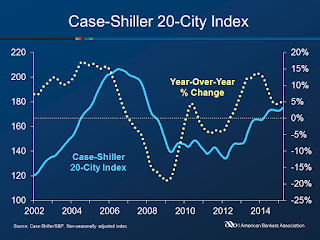 The increase this month brought the 10-city and 20-city indices back to their autumn 2004 level, but still remain roughly 15-16 percent below their June/July 2006 peak.