Real GDP growth fell sharply in the third quarter, growing at a 0.2 percent seasonally adjusted annual rate according to the Bureau of Economic Analysis’s advance estimate. Growth was slower across most GDP components, most notably in exports which declined by 7.2 percent after a 4.5 percent increase in the previous quarter. 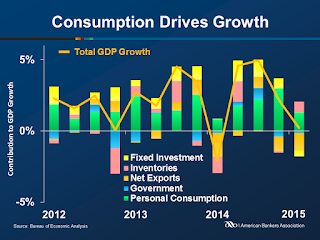 Personal consumption was the largest positive contributor to GDP—growing by 1.9 percent, down from 4.4 percent in the fourth quarter. Nonresidential fixed investment fell by 3.4 percent, after an increase of 4.7 percent in the fourth quarter. Investment in nonresidential structures was the most notable fixed investment loss, decreasing by 23.1 percent after gaining 5.9 percent last quarter.

Goods exports declined by 13.3 percent, likely due in part to strengthening dollar values. Imports of goods and services increased by 1.8 percent, down from 10.4 percent in the fourth quarter.

Government consumption expenditures rose by 0.3 percent, compared to a 7.3 percent fall in the fourth quarter. State and local government expenditures declined by 1.5 percent after increasing 1.6 percent.