Consumer credit broke the $4 trillion mark last December and immediately drew attention as to what it might mean for individuals and the economy. The answer: not much.

What matters is the number of people holding debt and their capacity to repay what they owe. After the financial crisis, there was considerable deleveraging by consumers. Debt obligations fell significantly as consumers pulled back spending, brought balances down, put aside more savings, and were cautious about adding more debt. Banks wrote off loans that went bad and adjusted their underwriting standards to reflect the increased risk of not getting repaid in a slow growing economy. While credit has expanded, so have jobs, income, and wealth. The good news is that both borrowers and lenders continue to exercise discipline and consumers are still in very strong financial shape.

Credit grows with a growing economy

Numbers matter. Since December 2009, there have been nearly 19 million new jobs created, with 10 million just in the last four years. And the April jobs number released today—at an impressive 263,000 new jobs—puts an exclamation point on this positive force for growth. Not surprisingly, as people start to receive a paycheck their spending increases as does the use of credit cards. Besides the natural increase in spending related to being employed (such as on gas, clothing and food), spending can also reflect a pent-up demand for foregone purchases (such as a new car). Moreover, after 3 nearly flat years following the recession, household formation has once again picked up, helping drive spending on furniture, fixtures and other household items (often on credit cards). 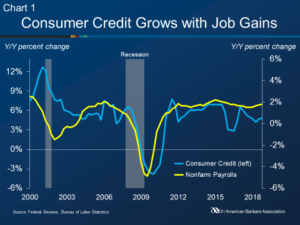 Chart 1 shows this relationship. After the financial crisis, consumer credit dropped sharply and lagged the rebound in jobs. Since 2012, consumer credit has grown consistently with the number of new jobs, decelerating a bit over the last year as the business cycle continues to mature.

It’s also important to note that not all spending using a credit card ends up being carried as a revolving credit. In fact, 30 percent of credit card holders are “transactors” who use cards as a convenient way to make purchases and pay off their balance in full each month (thereby avoiding interest payments). What’s important about this is that the volume of outstanding credit card balances reflects both transactors and “revolvers” who roll over some debt each month and pay interest on the monthly balance. This means the amount of true debt outstanding is significantly less than the official statistics suggest. It also illustrates that for many consumers, payment convenience and protection against fraud are what’s valued most—not access to short-term credit financing.

Incomes and wealth have risen Income matters. While it is true that overall household debt has risen to record highs, it is misleading to look at solely the nominal levels of debt. In a growing economy, debt levels often increase. Not only are more people working, but with fewer available workers looking for jobs, employers are increasingly feeling the need to raise wages to compete for the best talent. Wages have been growing more than 3 percent per year for the last eight months while inflation remains low, leading to increase consumer spending and wealth.

To accurately analyze the situation, it is necessary to consider household debt as a share of disposable income. After rising to a high of 116.3 percent during the financial crisis, it has come back down to healthier levels and now sits at 85.7 percent (see Chart 2). A related measure that is specific to credit card debt shows a similar post-recession trend and has exhibited little growth over the past six years. Finally, the debt service ratio, which measures the capacity of consumers to meet their monthly obligations, illustrates both the significant deleveraging that occurred after the financial crisis and that debt service payments remain extraordinarily low relative to income (see Chart 3).

In short, multiple measures clearly show that households are in a substantially better position to repay the debt they carry than they were a decade ago.

Unexpected expenses often make it difficult to meet credit obligations. Health care expenses, divorce, and job loss are common causes of debt problems and delinquencies. With a strong economy, delinquencies on both closed-end loans and credit cards remain considerably lower than pre-crises levels (see Chart 4). Not only did consumers deleverage after the financial crisis, they remain in a good financial position and appear to be capably managing their obligations. The Fed raised interest rates nine times between December 2015 and December 2018, amounting to a 225 basis point increase. The intent was to slow the growth of credit somewhat and keep the economy from overheating. The Fed has now put further rate increases on hold for the foreseeable future based on the strength of the economy and risk of inflation (which currently remains below the Fed’s 2 percent target). Thus, while rates have risen on some consumer credit products over the last three years due to Fed actions, monetary policy should remain accommodative and supportive of further credit expansion.

Increased consumer spending and debt in recent years is consistent with the growth in jobs and disposable income. Consumers have deleveraged significantly since the financial crisis and, based on several metrics, are successfully managing their debt obligations. Banks too are being responsible about extending credit, while at the same time providing opportunities for those individuals that fell on hard times, but have since recovered and are in a better position to manage credit. As long as labor markets remain strong, real wages continue to rise at a healthy rate, and consumers continue to manage their debt as they have for the last five years and change, delinquencies should remain muted.