Consumer sentiment rose in April, according to the University of Michigan survey, rising 2.9 points above March’s reading. This month’s increase brought the index to its second highest level since 2007. 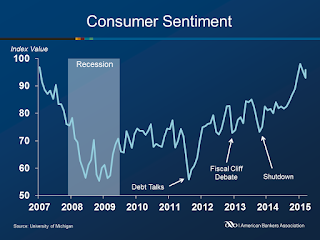 University of Michigan economist Richard Curtin noted that optimism has become increasingly dependent on low inflation and interest rates, and that although most consumers anticipate a rate increase in the coming year, they expect the increase to be minimal and offset by expanding jobs and incomes.

The Current Economic Conditions Index and Index of Consumer Expectations also rose in April, rising by 2 points and 3.5 points respectively. The Index of consumer expectations is 14.1 points higher than it was in April of 2014.

Inflationary expectations fell during the month. Consumers now expect prices to be 2.6% higher one year from now, down from 3.0% in March.