Consumer confidence rose to 90.0 in October, up 2.8 points from the previous month according to the University of Michigan Consumer Sentiment Index. The headline index in October is lower than the average level for 2015 so far (93.1). 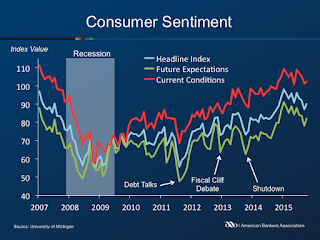 “The entire October rebound from September was due to gains in confidence among lower income households, while confidence among households with incomes in the top third of the income distribution retreated a bit due to concerns about financial markets,” says Richard Curtin, Chief Economist for UM Surveys of Consumers.

The Current Economic Conditions Index rose 1.1 points to 102.3, and was 4.0 points higher than October of last year. The Index of Consumer Expectations rose 3.9 points to 82.1, and grew 2.5 points year over year.