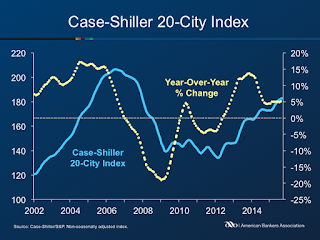 Home prices in three cities declined on a monthly basis, with Chicago declining 0.4 percent and Cleveland and Washington declining 0.1 percent. The cities posting the highest monthly gains were Miami and Portland with 0.9 percent and 0.8 percent increases.

“Home prices and housing continue to show strength with home prices rising at more than double the rate of inflation,” says David M. Blitzer, Managing Director and Chairman of the Index Committee at S&P Dow Jones Indices. “The general economy appeared to slow slightly earlier in the fall, but is now showing renewed strength. With unemployment at 5 percent and hints of higher inflation in the CPI, most analysts expect the Federal Reserve to raise its Fed Funds target range to 25 to 50 basis points, the first increase since 2006. While this will make news, it is not likely to push mortgage rates far above the recent level of 4 percent on 30 year conventional loans. In the last year, mortgage rates have moved in a narrow range as home prices have risen; it will take much more from the Fed to slow home price gains.”