New orders for durable manufactured goods decreased 0.5 percent to $235.5 billion in April, according to the U.S. Census Bureau. This decrease, down two of the last three months, followed a 5.1 percent increase in March. Excluding transportation, new orders increased 0.5 percent. 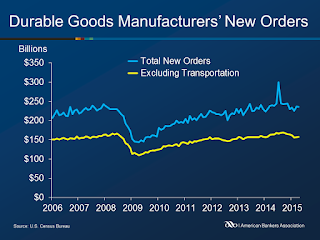 Shipments of manufactured durable goods, down three of the last four months, decreased 0.1 percent to $240.5 billion, following a 1.5 percent increase in March.

Inventories of manufactured durable goods, up twenty-four of the last twenty-five months, increased 0.2% to $401.5 billion, and continues to be at an all-time high since the series was first published in 1992.