The NFIB Small Business Optimism Index increased 1.4 points to 98.3 in May, the highest level since December. Eight of the ten components posted improvements, with the highest gain seen in the Earnings Trends (9 points). The two components that declined were Plans to Make Capital Outlays (-1) and Expect Real Sales Higher (-3). 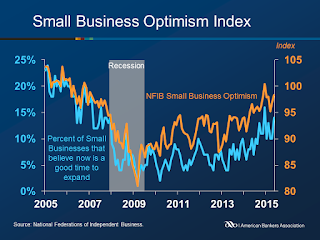 Earnings Trends improved to the highest level since October 2005, mainly due to a decline in the percent reporting lower earnings on a quarterly basis. The 3 point decline in Expected Real Sales volume followed a combined 10 point decline since the beginning of this year.

The component tracking whether business owners believe that now is a good time to expand gained 4 points while respondents expecting the economy to improve increased 3 points.

Credit conditions continued to be satisfactory for small business owners; just 4 percent of all owners reported that all their borrowing needs were not met, unchanged from the previous month and historically low. Financing and interest rates remained the least cited concern, consistent with the previous month. Taxes and government requirements and red tape shared the top position as the single most important problem.